Haunting at the Boat Yard 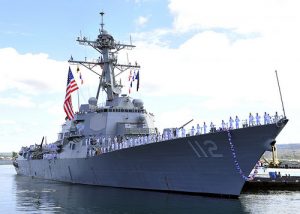 He came through the door with half a smile on his face. Since he was the only one in the yard locking up tonight, I wondered what had gotten into him. I noticed he was also a little flushed and it wasn’t his summer tan. The next instant I knew. He had seen old Joe McCoy.

Gary hadn’t seen old Joe since last Fall. Jacob, our son used to see him frequently when he was younger and worked at Dayton plumbing company but now not as much. Gary told me that he was out at slip 15 checking a mooring before heading off to repair the water purification system at the boat house. He looked up, and he saw a man standing at the end of the dock. Because it is not uncommon to have a late arrival and see someone on the pier, my husband walked toward him to check if there was anything he could do to lend a hand.

As Gary got about 30 feet from the fellow, the image of the man began to fade. Gary said he nearly swallowed his tongue. It wasn’t the first time he had seen Joe McCoy, but Gary admits it’s not something he’ll ever get used to. You see, Joe was killed in World War II. when the ship he was on was split in two. Still a young man when he died, we figure he would be in his nineties by now.

When the Brownell family bought the boatyard, the story of Joe came along with it. It wasn’t until after the family owned the business a full season that Joe was spotted near the water just looking down into the depths. Since he was reported as a friendly sort and never caused any trouble, Gary’s grandfather didn’t mind sharing the space with this benevolent, ghostly mascot. After his first appearance though, Grandpa Brownell decided to do a little more investigating.
Joseph Anderson McCoy was born in Mattapoisett in 1923. His family lived on the water. Joe, his father, and his two brothers worked in the boatyard situated in the same inlet that Brownell Boat Yard is located today. As is typical in a small town, everyone knew the McCoy family. Those who remember him from back in the day said he loved the water. It was only natural that he joined the Navy after Pearl Harbor. According to local legend Joe promised to come back and take over the boatyard from his Father. He wanted to grow the family business. Apparently he never faltered from his dream.

Listed on a bronze plaque in the entrance way of our town hall is Joe’s name, rank and the name of the ship he served on, the USS Murphy, a Benson Class Destroyer. The USS Murphy was hit mid-section and was split in two that fateful day. Remarkably, but sadly only thirty-six men lost their lives. Along with eight others from the area, Joe is remembered fondly for his service to our country.

Joe, like many young men left a sweetheart behind. Emily Prackston lived into her eighties. It wasn’t unusual to see Emily sitting on one of the benches here at the boatyard just looking out over the water. Although she went on to marry and raise two daughters with the local hardware store owner, she apparently always had a special spot for Joe. Who knows, they probably sat there together all those days until one day Emily couldn’t come any longer.

We don’t mind old Joe being here, and in fact would miss his presence if he left. We wish him well. We have all given some thought to getting someone out here to help him “crossover” – especially now that Emily has gone. We think he approves of what we’ve done with the place and can rest knowing it’s in good hands. Ivan and Jules, Gary, Jacob and I all feel it might be time to help him go. He’s done more than his bit. In the meantime, thanks Joe for being a part of the Brownell Boat Yard family.